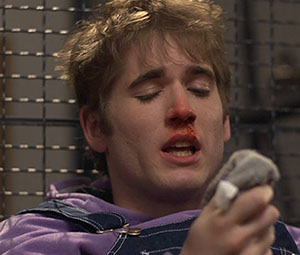 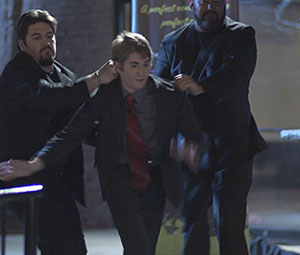 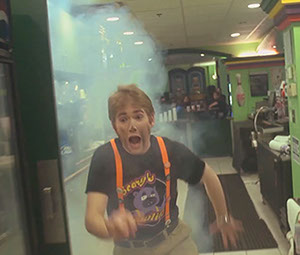 - OKAY KIDS I NEED SOMEONE TO DO THIS CAPTION STUFF.

SUPPORTIVE OF ARTS.  RINGO IS RUNNING FOR HIS LIFE-- FIRE!

Favorite moments were improvising scenes while everyone else got set up. He, Nich, and Cecilia improvised a 20-minute scene about knights trying to woo the lady of the lake that was caught on film.

Played by William Bixby. Ringo is an aspiring stand-up comedian who thinks he’s funnier than he really is. He wants nothing more than to leave St. Louis and chase his comedy dreams in New York City, but he’ll have to get over himself to make it happen.

William Bixby is a truly cultured man who was born in Florida but grew up overseas in exotic locales such as India, Slovakia, and Poland. While not drawn to acting as early as some others, it was his older brother that inspired him to give acting a try. His first performance was in a small production of Charlie and the Chocolate Factory in the seventh grade.

William says that in some ways he is like his character Ringo. They are both dedicated, driven dreamers. He can relate to having big aspirations no matter how much or what kind of talent you have.

William loved being physically funny as Ringo, including being thrown out of a casino by two large bouncers, doused with water on cold winter night, and being kicked inside of the Beary costume. He always had a great attitude and was game for anything.

ALH team give Will the biggest props for being willing to do ‘whatever it takes’ to get the job done.  Since Will has earned his BFA in Theatre from MSU we hope that he pursues his dreams of acting on stage and in film for the world to see.

ALL ABOUT RINGO » Create A Quiz 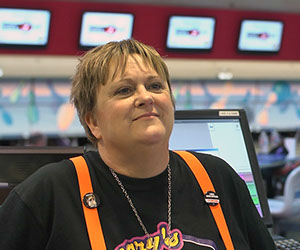 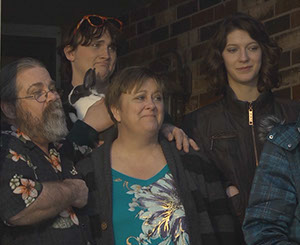 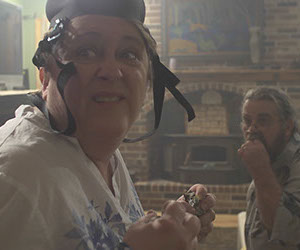 BETH WITH THE ACTORS PREPARING FOR RINGO'S LITTLE STUNT

If she could work with any actor, Beth would love to work with Sandra Bullock, Meryl Streep, or George Clooney.  Beth Domann got to beat up Jennifer Lawrence in  2010’s Oscar-nominated Winter’s Bone.

Played by Beth Domann, Deb is a hippie, employee and mom, but not necessarily in that order. Deb named her baby boy after her favorite Beatle, works hard as an Assistant Manager at Beary’s Bowling, and tries to be a loving wife, and mother, but sometimes her recreational activities get in the way.

Beth Domann grew up in Springfield, Missouri and graduated from Stephens College with a BFA in Theatre. Beth considers her first performance to be birth. She decided to pursue acting because she liked to make people laugh and it all fell into place very naturally for her. After college, she spent time as an actor and stand-up comic in Dallas and around the Midwest before returning to the Springfield theatre community.

Ms. Domann has acted on stage and film.  She has directed numerous plays at Springfield Little Theatre (SLT) and currently she serves as SLT’s Executive Director.

Beth and Deb might be the least similar characters out of the entire cast. Beth says that she is in no way as mellow as Deb, and if someone were to trash her house and make a mess like the scene with all of the food, she would “freak out”! Although, Beth says they might be a lot alike in their “smarty pants” ways.

Being on set was a blast for Beth. She loved getting to know everyone and working with them. She said that she can’t wait to see some of those names on the big screen because they are “freaky talented people.” The hardest change for her between theatre and film is having to wait around for production setups and retakes.

ALH hopes that Beth continues to create the humor in the fabulous characters that she brings to life on stage every year and that she will work with MSU productions again.

Learn more about Deb's world as you discover exclusively fun information from the creator, Kevin Shabel and Beth Domann.  Explore and observe key scenes from Deb's work history and begin your own adventure with her.

For the next month we will announce some fun games for us to learn about Deb.  Please find us at Facebook. 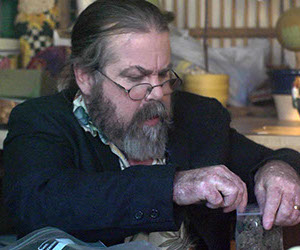 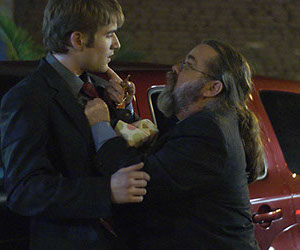 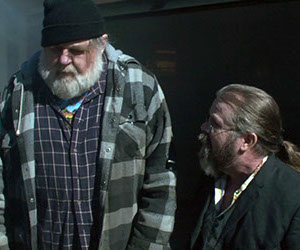 His favorite part of the entire production was getting to work with Beth Domann.

DAN played by David Greathouse.  David grew up in the small town of Arnold, just a short drive from St. Louis, Missouri. While he does act, he considers himself a songwriter and musician. Acting is more of a hobby that he greatly enjoys. He remembers his first performance as singing “Jingle Bells” with a toy guitar when he was two years old.

David loved being able to bring Dan’s character to life and says that he is just like the character because they look exactly alike! He laughs whenever he thinks about how much the smoke machine got was used to create Dan and Deb’s atmosphere. It certainly got quite the workout.

Like the other actors, David is mostly involved in the surrounding areas theatre scene. While he loves the immediacy of the theatre and having to work really hard to connect with the audience, film offers different opportunities. “I enjoy film because there is no audience to connect with…the small nuance in performance is detectable in film where it would be lost on stage.”

For A Little Help, not only did David write and perform the main title theme it got him his gig to be the webseries composer.  For David, composing was a new opportunity to stretch how he creates music.  Normally, he writes lyrics and then the music follows in this scenario he had to enhance the story through music without lyrics.  ALH feels very lucky we were the recipients of his talent which help set the tone for the series. 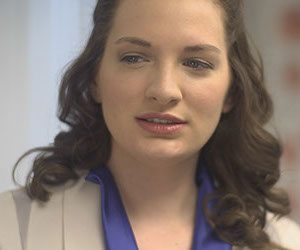 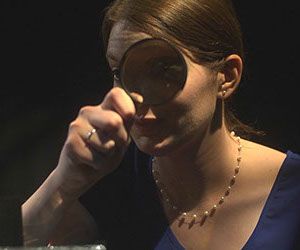 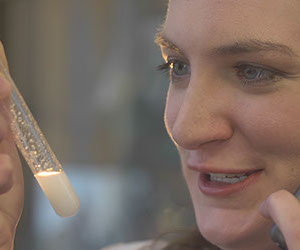 Cecilia would hands down love to work with Donald Glover or Joan Cusack. In her words, “Get me on a set with either of those actors and get ready to watch magic happen.”

Like her character, Cecilia Dorhauer is pretty baby crazy. While she doesn’t think she would ever go to the lengths Lisa does to conceive a child, she loved finding the comedic parts in Lisa’s obsessive personality “It may have been some of the most natural acting I’ve ever done just because I love talking about babies.”

Growing up in a huge family in St. Louis, MO, Cecilia used her acting to set herself apart from all of her siblings. At her first performance as a ladybug going on a picnic, she realized she loved being the comedic center of attention in front of a large audience. She has continued honing her comedic craft while earning her BFA in Theatre from MSU. She hopes to turn acting into a career.

On acting in A Little Help, she says that even though her character has some pretty embarrassing moments, she loved being involved in the production because of all the people she got to meet and work with. She is forever grateful for each priceless memory and friendship that she makes on any set or production.

ALH wishes Cecilia the best as she pursues her acting career in the Los Angeles area.

Learn more about Ringo's world as you discover exclusively fun information from the creator, Kevin Shabel and William Bixby.  Explore and observe key scenes from Ringo's journey and begin your own adventure with him.

For the next month we will announce some fun games for us to learn about Ringo.  Please find us at Facebook. 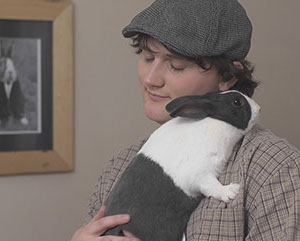 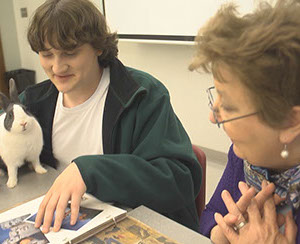 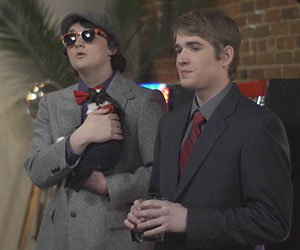 Drew would love to work with Bill Murray, preferably while filming a Wes Anderson film, but he’d “take anything really,” as long as Bill Murray was involved somehow.

Drew Diveley grew up in Independence, Missouri but didn’t develop his passion for acting until he was already in college. Anne Mahoney, his acting teacher at MCC Blue River encouraged him to continue down the path of acting as a career.

Drew’s first performance was during his junior year at Truman High School where he played the butler, Thomas Rogers, in the play And Then There Were None by Agatha Christie.

Drew sees his character as the “hyper Disney” version of himself meaning Lenny is a sweeter caricature of Drew. He loved that he got to perform with the rabbits on set, but counts his most embarrassing moments as being the three times when the rabbits peed on him. His new best rabbit friends Tessa and Elise proved to be a handful but he hopes that the end result will be well worth it. The real rabbits brought magic to the series that a fake bunny just couldn’t match. 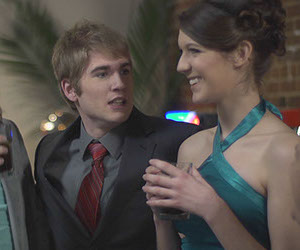 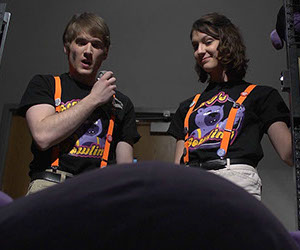 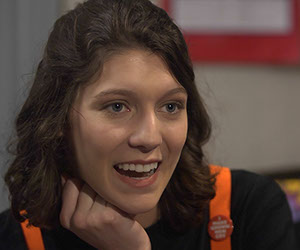 Her most embarrassing moment was being caught on camera singing Spice Girls songs with Will at the end of a really long day.

BETH played by Emily Feldt.  Emily hails from St. Louis, Missouri. On acting she says she can’t remember why she started, it was just something that has always felt right to her. Once she started performing, she couldn’t stop!

Emily and her character Beth have a few similarities much like the other cast and characters. Emily says, both she and Beth feel a strong senses of responsibility and try very hard to take care of the people close to them.

Emily loved bringing out the sweet and awkward side of Beth the most. “I think her intelligence and fun spirit make her a really unique character that falls out of the norm of female characters. While most fit into a specific category, Beth straddles a couple areas including dorky, pretty, and smart.” Emily brings to Beth a sense of sweet determination and caring that helps juxtapose Ringo’s sense of entitlement and selfishness. In other words, while one might wonder what she sees in him as a friend, we all get the sense that because he knows her, she will help him become a better person.

The hardest transition from theatre to film for Emily was working on scenes out of order. She had to learn the script and know it well so that she could jump into a scene at any moment and know how she was supposed to be feeling.

Since the production ended, Emily has also earned her BFA in Theatre from MSU and we wish her the best as she pursues acting in her future. 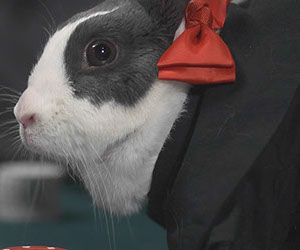 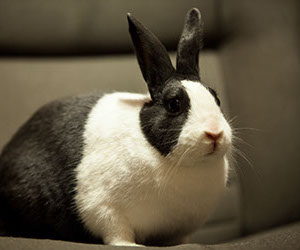 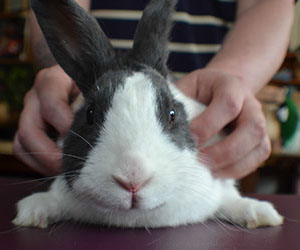 LOCATION: SUZANNE'S PLACE (ELISE TAKING A BREAK WHILE HER MASSEUR IS WORKING HER KNOTS.

GEORGE played by Tessa & Elise.  The two Dutch rabbits who play the part of George in A Little Help, are both sweet amazing animals with lively and rambunctious personalities. Although every rabbit is different, these two sum up the definitions of entertaining, intelligent, and sometimes even mischievous.

Elise is feistier, wanting her own way in everything. Tessa is outgoing, lively, and enjoys hopping about the yard as the chief grass inspector.

Both rabbits had their diva moments while filming multiple scenes with lots of people in the casino and student classroom.  Neither liked to be dressed in George’s tuxedo, but each eventually complied.

Rabbit keeper Kae and all the handlers kept our rabbits fed, watered and calm between takes to better help the production stay on track.

Since ALH production has completed production both rabbits have given birth to multiple litters of beautiful Dutch bunnies babies.  ALH would like to heartily thank Anna Lang, Tessa and Elise’s breeder for her willingness to allow us to get to know her gorgeous and funny bunnies.

Hearing dialogue I’d written spoken aloud for the first time by real actors. It was awesome and humbling

Watching the actors practice their lines and prepare for their auditions was really interesting, especially since so many people auditioned for the same role

Personally, I am looking for actors who had a unique sense of humor, could follow directions, and did not over-rehearse.

A Department of Media, Journalism & Film

FILL THE FORM BELOW